Whether you're an experienced sport pilot looking for the ultimate thrill or an expert aerobatics competitor who wants a definitive advantage, the new Hangar 9® Extra 300X 120cc ARF is your solution. Like all of Walter Extra's aerobatic creations, Hangar 9 giant-scale aerobatic models are synonymous with performance. As the bar is raised to meet modern performance standards, Hangar 9 models have proven to offer an outstanding balance of precision and extreme maneuverability. Now the next generation calls again for the ultimate in performance so that booming pilots have the inspiration and confidence to push the envelope.

The Hangar 9® Extra 300X 120cc ARF is a 35%-scale version of the mid-wing aerobatic champion. Designed to suit the competition-level pilot with a sense of quality and precision, its construction delivers a distinctive combination of durability and performance. The wings have foam-core construction that's fully sheeted with balsa for airfoil integrity that's paramount for precision flight. Built-in double carbon-fiber wing spars and a carbon-fiber wing joiner tube help carry all aerodynamic stress loads. Oversized control surfaces provide incredible pitch authority and blinding roll rates as well as the ability to perform slow-speed 3D with almost physics defying agility. Fly it high in the box, or down on the deck, its high-contrast finish in genuine Hangar 9 UltraCote® will help you keep the right side up and looking great.

So that you can start enjoying the fantastic flight performance of this Extra 300X sooner than later, a number of time saving features come standard with this ARF kit. The wing and stabilizer halves are factory prepped with the heavy-duty pin hinge locations pre-drilled along the double-bevel edges. The enormous rudder is fitted with flat hinges so that it's removable once the long hinge pin is pulled out. The included fuel tank is plumbed and installed. The firewall is drilled to fit the engine mounting patterns of popular options such as the Evolution® 125GX twin-cylinder gas engine. A built-in exhaust tunnel is capable of handling a wide variety of pipe and canister mounting options. The high-quality hardware package is complete and includes pro-level components like titanium pro-links with heavy duty ball connectors.

At the field, convenience features like the plug-in wings and stabilizers get you ready to fly quickly. Like the flush-mounted cowling, the large fuselage hatch is molded for a professional look that's long-lasting. In the air is where you'll really appreciate this Extra. Its mid-wing design offers outstanding handling in both positive and negative maneuvers. The powerful rudder, with its large control throw, opens up a host of extreme-maneuver possibilities. With the removable side-force generators included you can add even greater knife edge performance to your flight sequence. With the Extra 300X 120cc ARF, extreme aerobatic performance is within your grasp. 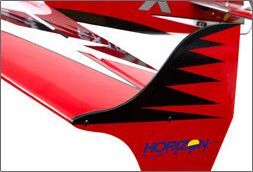 Durable Construction
The foam-core wings are fully sheeted with balsa so the true airfoil is maintained from root to tip. Inherent rigidity plus double carbon-fiber wing spars means that precision flight and overall durability are enhanced. 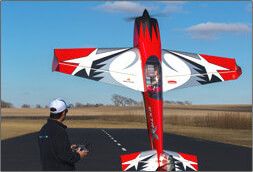 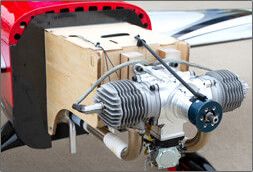 Simple Engine Installation
The firewall is ready to accept the recommended Evolution® 125GX twin-cylinder gas engine which has the same mounting pattern as a host of other engines in the same size-class. 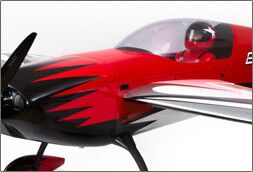 Professional Touches:Like the flush-mount cowling, the fuselage hatch is painted to match for a high-end appearance that's easy to maintain. The built-in exhaust tunnel can accept a wide range of pipe and canister options.

Painted Hatch:Like the cowling, the top fuselage hatch is painted to match for a professional appearance that's easy to maintain.

Pre-Drilled Firewall:The firewall is pre-drilled to accept the Evolution® 125GX twin-cylinder gas engine. The mounting pattern will also fit a host of other engines in the same class.

Genuine UltraCote® Film:The vibrant four-color trim scheme offers excellent contrast and visibility. And because it's executed with UltraCote film, its brilliant finish is long lasting and easy to maintain.